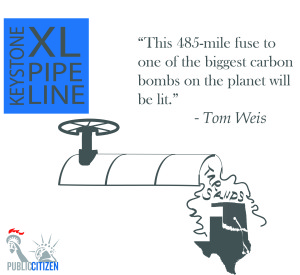 Keystone XL’s southern half is scheduled to start operating for commercial purposes tomorrow, Wednesday, January 22nd. As much as 700,000 barrels per day of bitumen extracted from tar sands in Alberta, Canada, could be pumped through Oklahoma and Texas, igniting the fuse to the greatest carbon bomb on the planet.

The southern leg, rebranded the “Gulf Coast Project” by TransCanada, stretches 485 miles from Cushing, Okla., to Texas Gulf Coast refineries in Port Arthur and Houston. Last month, on Saturday December 7, 2013, TransCanada began injecting crude oil into the Gulf Coast Project. Spokesman Shawn Howard said they planned to “inject about 3 million barrels of oil into the system” in the weeks leading up to the start of commercial operation. In an interview with Reuters, TransCanada’s CEO Russ Girling said that they are now connected from Canada to Texas through the existing Keystone pipeline.

“We are now actually connected all the way to the Gulf Coast,” Girling said. “So we actually have …a contiguous system that has the ability, once Gulf Coast is up and running, to deliver 600,000 barrels per day to the coast.”

TransCanada’s Gulf Coast Project may very well be up and running by tomorrow, but questions about the safety of the pipeline remain, as do concerns for those living along the path of the pipeline and in refining communities.

The shoddy construction of the pipeline has increased concern for some landowners along the route.

For many Texans, their land is their sanctuary and the thought of a spill on their property would be devastating. One such landowner is Lamar County farmer Julia Trigg Crawford. Julia Trigg is the manager of her families Red’Arc Farm, and has been battling TransCanada in the courts over eminent domain abuse for more than three years. The Texas Supreme Court recently ruled in Julia Trigg’s favor, ordering TransCanada to respond to her appeal by Feb. 6 as the justices weigh arguments to hear her case.

Julia Trigg, like other landowners, is concerned about the diluted bitumen (dilbit) that will flow down the pipe. “This is not your mother’s everyday crude,” she explained to Yes! Magazine. “What’s coming out of Alberta is corrosive, it’s the consistency of peanut butter, and it’s pumped at much higher pressure. When it spills in a waterway it does not float. It sinks to the bottom.” (Click here to watch a video of Julia Trigg Crawford speak at the Independent Texans Convention back in September.)

The Gulf Coast Project crosses 631 waterways in Texas and a leak could affect the water supplies of millions of people.

Fence Line Communities at the End of the Line

Gulf Coast refineries have become a prime target for tar sands refining. Many refineries have rejiggered their facilities to process the heavy oil coming from Alberta. The communities that live across the fence from Gulf Coast refineries, the end of the line for Keystone XL South, are primarily Latino and African-American. These communities are suffering disproportionately from the affects of carcinogenic emissions, making it a textbook case of environmental racism.

The community of Manchester, the oldest neighborhood in Houston, is nearly 90% Latino and one-third of the residents fall below the federal poverty level. In addition to being oldest neighborhood Houston, Manchester is also the most toxic. A study convened by the Institute for Health Policy at the University of Texas School of Public Health, titled “A Closer Look at Air Pollution in Houston: Identifying Priority Health Risks,” identified seven pollutants that pose a definite risk to health in the community of Manchester. The report goes on to say, “In sum, East Houston neighborhoods that face a number of vulnerabilities based on their marginal social and economic standing also carry a heavier burden of health risks from breathing pollutants in their air.” Manchester is nearly surrounded by industry on all sides, including a Valero and Lyondell Basell refinery, and is situated along the Houston Ship Channel. Researchers have found that “children who live within two miles of the Houston Ship Channel have a 56 percent greater chance of getting leukemia than children living elsewhere.” In anticipation for Keystone XL, Lyondell Basell has more than doubled their tar sands bitumen refining capacity to 175,000 barrels per day.

Port Arthur is the other destination for Keystone XL South. This small city is home to a pet-coke facility, chemical plants, and a handful of refineries – including the largest oil refinery in the U.S., Motiva. These refineries spew toxic emissions laden with VOCs (Volatile Organic Compounds) into the air near neighborhoods and the community of West Port Arthur. West Port Arthur is a mainly African-American community and it is situated between the Motiva and Valero refineries. Residents have nicknamed Port Arthur ‘toxic city.’ There is no doubt that these refineries bring jobs, in an otherwise desolate town, but they also bring asthma and cancer to those living next door.

These two communities have become ‘sacrifice zones’ for tar sands refining, and spill or no spill, they will bear the burden of the refining process.

Corporations have their cake and eat it too, then deny cake’s existence Learn about the toxins in your life – see the new documentary – Unacceptable Levels