Our Biosphere in Peril: 50% Decline in Wildlife Populations 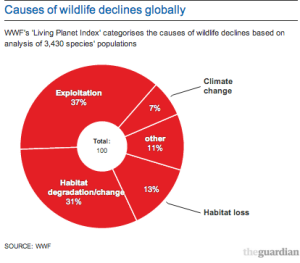 Research published in a new report by the World Wildlife Foundation and the Zoological Society of London found that the population of wild animals on Earth is now half of what it was in 1970. Freshwater species have seen an even more dramatic decline of 75%.

The researchers concluded that the decline in wildlife populations is due to human activity: unsustainable hunting, pollution, habitat destruction, and climate change.

Though climate change in this report accounts for 7% of the loss of wildlife in the past 40 years, climate change’s impact on the Earth’s ecosystem is expected to dramatically increase.  Some experts estimate that a-fourth of the Earth’s species could be extinct by 2050 due to the effects of climate change.

Climate change will also have negative impacts on humans.  Global temperatures are projected to rise 4 degrees by 2100.  In the hotter months of the year we can expect exposure to temperatures above 38 degrees Celcius (100ºF) on a common basis, which can cause organ damage and death.  Crops and livestock will struggle with the rising temperatures and water shortages.  Humanity’s staple crops, corn, rice, wheat and soybeans have a temperature limit of 40 to 45 degrees Celcius (104ºF to 113ºF), “with temperature thresholds for key sowing stages near or below 35 ºC (95ºF).”

The current human consumption of natural resources is unsustainable.  Climate change exacerbated by human activities at this rate is detrimental to both wildlife and the human species.  At this rate, we can expect to see the collapse of ecosystems on which we depend for our survival.   The scientists behind these various reports hope that these statistics and projects will serve as a wake-up call to ramp up conservation efforts and mitigate the effects of climate change and our exploitation of the environment and its resources.

Burger King: Being Your Way is Not OK A Junk “Study” from 60 Plus on EPA’s Clean Power Plan