Despite Abbott’s Call for Ethics Reform, Texas is Set to Vote on an Anti–Ethics Bill 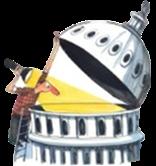 The Texas Senate is considering Senate Bill 10, which is basically a politicians’ protection plan.

Corruption in state government is so bad that Governor Abbott declared ethics reform an emergency shortly after taking office earlier this year.  But instead of making the tough changes necessary to stop corruption in the capitol, the Senate is about to vote on SB10, which will make it easier for public officials to get away with unethical and illegal conduct.  It’s another scandal in the making.

Email your state senator to let him or her know you don’t support the SB 10.

It has been suggested that SB10 should be renamed the “Corrupt Incumbent Official Indemnification Act.”  It creates a special legal system reserved for elected and other public officials, and constructs a complex maze designed to stymie criminal investigations and prosecutions.  If the bill becomes law, prosecuting a corrupt official will require the unanimous approval of the Attorney General, the Texas Rangers, the presiding judge of the judicial region where the accused resides, and a local prosecuting attorney.  This unnecessarily complicated series of review will operate as a political filter and give a green light for cover ups and continued corruption.

And the current attorney general may not be the best person to investigate others for ethics violations. On May 2, 2014, then-candidate Ken Paxton signed an agreed order with the Texas Securities Commission.  He admitted to referring clients to his friend’s investment company even though he was not a registered securities representative, and failing to disclose a 30 percent kickback he received on investment management fees. He claims it was an honest mistake but he should have known better.  While in the legislature, Paxton voted in favor of the statute that outlawed such conduct. And he later voted to amend that statute to specify that those violations are a third-degree felony. So how tough do you think Paxton is going to be on corrupt elected officials?

SB10 is based on a false premise: that the counties who elect public officials will hold them more accountable.  But how tough are members of the courthouse cabal likely to be on a wayward politician in his or her hometown? Historically, the good old boy system has been a powerful deterrent to effective and tough local prosecution.  Over the last 40 years we have had scandals in Duval, Hidalgo, Cameron and Dallas counties that involved corrupt elected officials who were protected by the local political machines. It often took bringing the FBI in to clean up the mess.

Home cookin’ – The bill’s sponsors suggest that fairness to the defendants in this special class of cases dictates that they be prosecuted in their home counties.  But criminal prosecutions of all kinds are generally tried in the county where the crime occurred—in public corruption cases, that is usually in the seat of government.  And in the vast majority of states, including Texas, public integrity cases are handled by a local prosecutor in the county where the offense occurs. In a few states, the attorney general prosecutes these cases, but again, usually where the crimes occur. Only one state—Wisconsin—has a “hometown venue with a hometown prosecutor” provision.

There are some who say that the Travis County District Attorney’s office is too partisan and are using that excuse as a reason to move prosecution of public corruption cases away from the seat of government.  The reality is that the Travis County Public Integrity Unit (PIU) has pursued public corruption cases in a non-partisan fashion. Of the 21 elected officials it has prosecuted since 1978, 15 were democrats and 6 were republicans.

What can be done to assure tough prosecution? After burying SB10 without a eulogy, the existing system, which works well and gets to the heart of corruption, should be fully funded.   Failing that, Texas needs to find the toughest independent prosecutors in the state and put them to work cleaning up corruption at the capitol.

So what can citizens do? Email your state senator and ask them to vote against SB10, the politicians’ protection plan.  For even more impact, call his or her office to make your view known.

Don’t know who represents you?  Click here to find out who your state senator is.  Contact info is below the jump.