As if the relentless heat wasn’t enough this summer, Austin is experiencing hazy skies due to an African dust cloud originating in the Saharan desert. The dust was most noticeable on Sunday, July 1. The technical term for this dust is “fine particulate matter,” particles that are so small they can travel from our lungs into our blood stream, causing health problems. An individual particle is 1/20th the width of a human hair. 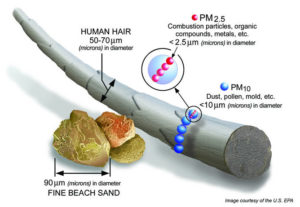 The Clean Air Act establishes standards for fine particulate matter (also known as “PM2.5” because it is 2.5 microns in diameter) in the air we breathe. PM2.5 is measured in micrograms per meter cubed, a measurement of how much material is found in a given volume of air. The Environmental Protection Agency has established limits of PM2.5 at 35 μg/m³ in a 24 hour period and 12 μg/m³ in an annual average. If an air monitor exceeds that level of PM2.5, then the region it monitors risks being designated in “nonattainment” of the federal standard. There are currently no areas in Texas in nonattainment of the PM2.5 standard, though there are several areas in nonattainment of the ozone pollution standard.

This does not mean, though, that Austin risks falling out of attainment of the fine particulate matter standard. There are a few reasons for this. First, measuring compliance with the standard is a complex calculation that involves averaging three years of air monitoring data. Second–and more importantly for air quality this week–African dust is considered an “exceptional event” that would be excluded from the data anyway.

An exceptional event is an air pollution event that is excluded from the data because it meets certain criteria. The EPA establishes the criteria for an air pollution event to be considered exceptional. These criteria include that “the event is associated with a measured concentration in excess of normal historical fluctuations, including background.” 40 CFR § 50.14(c)(3)(iv) (emphasis added).

African dust has been reaching Texas since time immemorial, and the impact of these events on air quality in Texas is absolutely part of the normal historical fluctuations of weather and air quality. In fact, the phenomenon was first identified by a noted historical figure, Charles Darwin, during his famous trip aboard the H.M.S. Beagle in 1833.

You might think that the considerable historical record on African dust events would cause EPA to reject their exclusion from the data on the basis that they are, after all, well within “normal historical fluctuations.” You would be wrong. The truth is that Texas has a long history of claiming exceptional events that include African dust storms. Other typical exceptional events in Texas include agricultural fires in Mexico (as old as agriculture) and ozone pollution blowing in from other countries (also Mexico, also old). 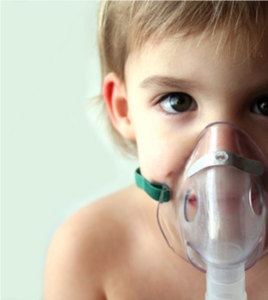 Why does this matter? Most importantly, air pollution is linked to public health. Children, the elderly, and people with respiratory ailments such as asthma and COPD are particularly vulnerable to air pollution. We have to keep our air clean to keep ourselves healthy. But nonattainment designations have consequences for a region that can last for decades and cost billions of dollars. Houston and Dallas, for example, have been trying to get into attainment of the ozone standard for decade. It’s why we have emissions tests for our cars, and why we can’t build a new factory without reducing pollution from an existing one. The consequences are so great precisely because the impact on human health is so serious. Asthma is the number one cause of school absences. Globally 7 million people die each year from air pollution.

So the purpose of a nonattainment designation is to make our air healthier and protect ourselves and our children. Unfortunately, in Texas, the focus is on avoiding nonattainment designations and their consequences to big business. Several times in the last few years, Texas has used the exceptional events rule to keep areas artificially in attainment of air pollution standards. In 2013, the Texas Commission on Environmental Quality plainly stated that it was excluding enough exceptional events from Houston’s data to keep the area from being desingated under the fine particulate matter standard. Several air quality advocates (including myself) objected to this move. We even pointed to Charles Darwin’s observations as evidence that Texas could not exclude African dust events from its data.

Our objections were ignored by Texas and EPA. The result today is that thousands of people are breathing air that does not meet federal pollution standards. Their health will suffer as a result. Some people will even die. There are quantifiable consequences to these decisions, and they are measured in human lives.

Since the 2013 move to avoid designating Houston as not meeting the PM2.5 standard, several other exception event exclusions have kept areas of Texas artificially in attainment of pollution standards. El Paso doesn’t meet the ozone standard, but exceptional events blamed on Mexico in 2015 have helped the area to avoid a nonattainment designation. More recently, the failure to designate San Antonio as not meeting the ozone pollution standard was blamed on ozone transport from other regions.

In some cases, Texas is using the law correctly to exclude exceptional events. (Houston’s lack of a PM2.5 designation is not one of these cases. We still maintain that it was done improperly and in violation of the exceptional events rule and the spirit of the Clean Air Act.) But even if the state is legally correct in its maneuvers, it’s doing so at the cost of human health. When the Texas Commission on Environmental Quality relies on tricks of data manipulation to avoid federal scrutiny, it is prioritizing business interests over people. A nonattainment designation has consequences for business and industry: old plants have to clean up, new plants have to invest in clean tech. These consequences do reach into the billions of dollars. The total cost of compliance with the Clean Air Act in 2020 is estimated to be $65 billion. But the health benefits of cleaner air in 2020 is estimated at $2 trillion. That’s a return on investment of more than 30 to 1.

Notably, more and more of our air pollution is coming from vehicles. When you register your vehicle, you pay a fee that is used in part to reduce vehicle pollution. When you get your car inspected and make any improvements needed to meet emissions standards, you are investing in clean air. Texas makes sure that you pay your fair share of the cost of reducing air pollution, and you should be happy to do so. After all, it is an investment in your health and your children’s future.

So why does Texas keeping fighting against Clean Air Act regulation? It’s a question of priorities. Much of the cost of compliance is born by industry, especially the oil and gas industry. That’s a powerful lobby in Texas, far more powerful than children who can’t go to school because of chronic asthma attacks. Texas is willing to skirt some regulations in order to save money for industry. It isn’t willing to invest in environmental improvements that pay huge dividends to its people in the long term.

Industry profits today, or public health tomorrow. Texas has made its choice. What’s yours?

No Shortage of Murky Morals in the Trump Cabinet: Commerce Secretary Ross Faces Possible Ethics Investigations How Smart TVs in Millions of U.S. Homes Track More Than What’s On Tonight

Caught in the Crosshairs of Corporate Power. Part 3: Fracking Pollution