On Tuesday, September 17, the Dallas City Council passed its new biennium budget, funding an environmental plan with the development of a climate plan.

The historic vote was marked by a press conference with ten environmental and health groups and Council Member Sandy Greyson, who fostered the $500,000 budget amendment for the plan.  The Office of Environmental Quality, that will oversee the climate planning process, also participated in the press event. 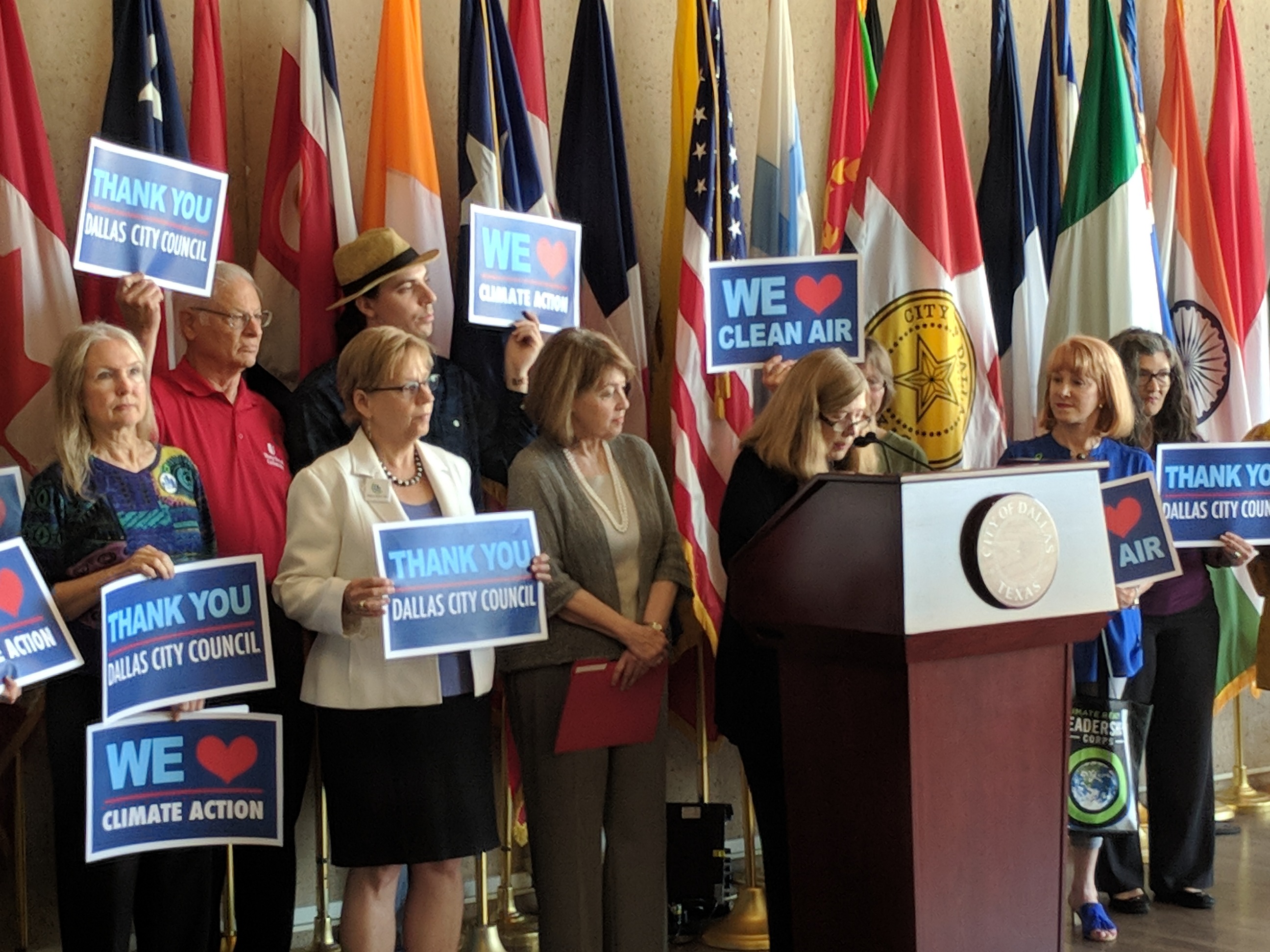 The Dallas Mayor issued a statement regarding the vote noting:

“With no current state or federal action on climate change, it is apparent that local governments must shoulder the burden. The City of Dallas accepts this responsibility and is actively working towards building a greener, more resilient city.  Addressing climate change should not be a controversial or partisan issue, and local leaders and the marketplace should work together in pursuing climate action.”

“That’s why I am excited that we have approved funding for a Comprehensive Environmental Action Plan.  The City’s Office of Environmental Quality & Sustainability will have the resources and responsibility to chart a path of environmental and climate action for the coming years in alignment with the goals of the Paris Climate Agreement.”

Dallas Mayor Mike Rawlings signed onto the Mayors National Climate Action Agenda in June 2017, which was formed after the United States withdrew from the Paris Climate Agreement and commits cities to the goals of the Paris accord.

A total of five cities in Texashave signed the Mayors’ Climate letter. Austin passed a climate plan in 2015. San Antonioisdeveloping a climate plan now, while Houston has just initiated its planning process.  San Marcos and Smithville have also signed onto the Mayor’s Agreement.

More cities in Texas, both large and small, need to step up to the plate and do what they can to reduce their carbon footprint. When an area reduces its dependence on fossil fuels, it can also be beneficial to improving overall air quality in regard to volatile organic compounds (VOCs) and nitrogen oxides (NOx), both major components of ozone.

In Dallas, 1 in 10 children suffer from asthma, costing Dallas County more than $60 million annually, yes annually, in direct and indirect costs.  Clearing the air can only help improve the health and vitality of all our communities.

The U.S. is the only country worldwide that is not part of the Paris Climate Agreement, after the current Trump Administration pulled out of its commitment.  As a result, the Mayors Climate Coalition was formed, with more than 400 Mayors representing 70 million Americans dedicated to taking action to reduce their communities’ carbon footprint.

So I urge citizens to band together, to talk to their City Councils, and ask their municipalities to join the Mayors Climate Coalition.

Now that Dallas has stepped up to begin its climate planning process, it is my hope that neighboring Ft. Worth and other cities around the state, will take on the challenge, for the health and welfare of their communities.

For more than fifteen years, Rita Beving has been a volunteer and professional advocate on environmental issues including air, water, and landfill in North and East Texas coordinating with numerous environmental groups across the state.