What It Means To Be An Organizer

Last week was difficult. The IPCC report – Global Warming of 1.5 °C – was released on Monday, October 8 and the news articles that ensued after its release were torrential and more often than not, dire. I read one after the another like my life depended on it, inundating myself with predictions of doom, whispers of hope, and passionate calls to action.

By the end of the week, my nervous system was fried. My ecoanxiety was worse than ever.

I work as a climate justice organizer based in San Antonio, Texas with Public Citizen. People often ask me what my job means. In short, organizing is “a practice aimed at helping people create the social movements and political organizations necessary to wage campaigns and win power”. When centered around climate justice, it means that I work towards building power to address climate change and support climate solutions. I spend my days doing research, reading policy and news, hosting meetings, attending meetings, planning events, petitioning, canvassing, sending emails, conversing with all kinds of people, writing, educating, speaking, presenting, and a whole host of other things.

This work is extremely meaningful to me and I can’t see myself doing anything else at this point in my life. I’m immensely grateful that I’m able to make organizing my profession. However, you don’t have to be a professional organizer to organize. Some of the best organizers I know have day jobs. They organize because they are angry at the vast injustices that exist and are passionate about building a better world for everyone. The realization that the injustices of the world are created by unjust systems and structures and understanding that those systems and structures can be dismantled, transformed, and built anew is the root of organizing. Our economic, social, and governing structures were created by people and therefore can be changed by people. 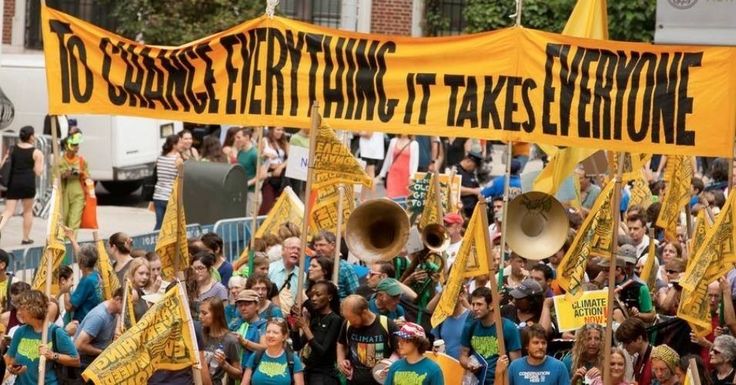 Organizing is not something that happens – or at the very least succeeds – as an individual effort. At the heart of organizing is community building. However, our society is built around isolation and alienation. This is the great challenge and strength behind organizing: bringing people together, creating meaningful relationships, and engaging in important and significant work.

The IPCC report states that the next decade is the definitive decade for whether or not we stay within 1.5C of warming for the Earth. More than 1.5C of warming means that every coastal city in the world floods, every island nation disappears under rising sea levels, hundreds of millions of people become climate refugees, drought, food scarcity, and vector-borne diseases would all become increasingly persistent and severe problems, and we’d run the risk of feedback loops leading us into even more warming and even more climate catastrophe. Simply put, the more the planet heats up, the more uninhabitable it becomes for life, including humans.

I hear people express concern and worry over unaffordable housing and gentrification, food deserts, increasingly severe flooding and weather events, lack of public transit, poor air quality, police and ICE brutality and discrimination, the lack of safe pedestrian and cyclist infrastructure, meaningless jobs that don’t pay a livable wage, a broken healthcare system, longer heatwaves, mental health concerns, barriers to political engagement, and many other issues. Climate justice has a stake in all of these issues and all of these an issues can be (and more likely than not are) organized around. Organizing isn’t easy by any means, but it offers us the tools to make our lives better and in the case of climate change, it means fighting for life as we know it.

Many battles have been won from organizing such as 8-hour workdays to free breakfast in schools to desegregation to women having the right to vote and countless more. The rights that we enjoy today are the results of coordinated efforts by people, not the goodwill of those with power.

Now is the time for all hands on deck. We are at such a critical and uncertain moment in humanity’s history, we must act. Anyone can become an organizer and everyone who can should. We must organize and win collective power in order to prevent climate catastrophe.

When people ask me what it means to be an organizer, I tell that it means being defiant. It means refusing to settle for the status quo under an unjust and cruel system. It means speaking louder when I am told to be silent.

Organizing means knowing a better world is possible and fighting alongside others to make it a reality.

Did Trump Squelch The FBI’s Office Relocation Plans? This is Not What Democracy Looks Like: Big Money Floods Midterm Election Races