According to Texans for Public Justice (TPJ), the Texas Railroad Commission repeatedly misled the public about its involvement in two controversial gas pipelines. The pipelines will be built across West Texas by Energy Transfer Partners (ETP), which has given almost $225,000 in recent years to the three Railroad Commissioners.

After repeatedly claiming that it had no role in the project, the Railroad Commission quietly approved permits to allow ETP to condemn the land of hundreds of ranchers. Explaining such takings to the commissioners’ xenophobic GOP base could be rough–given that the purpose of the pipelines is to supply gas to Mexico’s state-owned electric company.

Comments are due one week from today on the EPA’s proposal to curb carbon pollution from existing power plants, the Clean Power Plan. I’m writing a series of blog posts to share some of what will go in our comments to the agency. We’ll start with an issue most people aren’t talking about: Switching from coal to natural gas, a major element of the EPA plan, is a colossal waste of money because we’ll need to switch from natural gas to renewables soon anyway. In its proposal, the EPA ignores this hidden cost of natural gas.

One of the main ways EPA envisions curbing carbon emissions is by replacing coal-fired electricity plants with ones that burn natural gas. The proposal relies heavily on this strategy, so much that it would spur a good deal of additional natural gas extraction, including hydraulic fracturing or “fracking.” That’s a great reason not to rely on natural gas to solve our climate problem. We shouldn’t have to create a new set of environmental disasters to stop climate change – and we don’t.

There are two other major problems with EPA’s plan to increase the use of natural gas. The first, which is getting a lot of attention, is that switching from coal to natural gas may have little to no climate benefit. Natural gas releases a good deal of methane throughout its life cycle, and methane is an extremely potent greenhouse gas. On a twenty-year time horizon, it is 87 times as climate-disrupting as carbon. In 100 years, it’s 36 times more potent. As Joe Romm put it over at ClimateProgress, “by the time natural gas has a net benefit you’ll likely be dead and the climate ruined.”

Even setting aside the methane issue, burning natural gas also emits carbon – less carbon than burning coal, to be sure, but that’s not good enough. We don’t just need to reduce carbon emissions. According to the International Energy Agency’s most recent analysis, we should cut them to zero by 2040. What’s the point of switching to natural gas between now and 2030, the end date of the EPA’s proposed rule, if we’ll need to phase out natural gas by 2040? Why not just skip straight to renewables? We’re making these points in our comments – without the rhetorical questions, at least in the current draft – as are many other groups.

Here’s the second, less recognized point, which stems from our consumer perspective. These changes cost a significant amount of money, much of which will ultimately be paid by consumers through electricity bills (or through higher prices for goods and services from companies who paid the costs on their electricity bills). Overall, the Plan will save consumers money because it includes efficiency measures that will reduce electricity use, but it could be even better. Switching twice rather than once – from coal to natural gas, then natural gas – needlessly compounds the cost of responding to climate change. The EPA’s proposal ignores the additional costs of this double-switch. In essence, we’re telling the agency that it needs to use a more comprehensive, more accurate accounting of the cost of natural gas. The real cost is the price of switching from coal to natural gas, which is expensive in its own right, plus the cost of switching to renewables almost immediately thereafter.

NASA and University of Michigan scientists have discovered a massive cloud of methane that spans 2500 square miles (about the size of Delaware) located above the the Four Corners intersection of Arizona, Colorado, New Mexico, and Utah.

Eric Kort of the University of Michigan, Ann Arbor attributed the dramatic methane emissions to leaks in natural gas production and processing equipment in New Mexico’s San Juan Basin.  The San Juan Basin is the most active coalbed methane production area in the US.  The coalbed methane covers the pores and cracks in coal.  As this methane seeps out from underground coal mines, it causes fatal explosions almost yearly.

While the methane concentrations in that area are not an immediate health risk to the local inhabitants, it has significant implications for climate change.  As a greenhouse gas, methane is 86 times more potent in its atmospheric effect than carbon dioxide in the first two decades after release.  25% of human-induced global warming is caused by methane emissions in the environment.

As the U.S. considers transitioning from coal to natural gas as a means of reducing greenhouse gas emissions, it is critical that accurate assessments of leaking methane are accounted for in all calculations.  If leakage of natural gas isn’t greatly reduced, switching fuels may make little or no difference in combating climate change.  This methane hot spot should serve as a warning that other undiscovered leaks are probably out there and having a significant impact.

The business behind hydraulic fracturing for natural gas has become a hot button issue in the more recent years, but natural gas pipeline projects often get less attention. 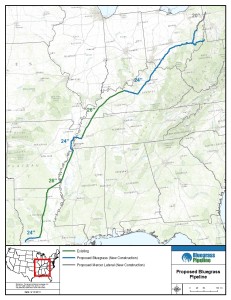 The Bluegrass Pipeline was to be built in order to transport natural gas liquids (NGLs) from the Utica and Marcellus shale regions down to the Gulf Coast. The Bluegrass Pipeline is a joint project by Williams and Boardwalk Pipeline Partners, LP, two of the nation’s leading energy infrastructure companies. As it is proposed, the completed pipeline will transport at a rate of up to 200,000 barrels of NGLs per day. The company was to start by building and repurposing approximately 600 miles of the 1,200 mile pipeline. It would begin in Pennsylvania and travels through Ohio, Kentucky, Tennessee, Arkansas, Mississippi and Louisiana.

One of the largest environmental concerns involves the pipeline spurs from Kentucky. The land that the pipeline will be built on has limestone karst geology that carries water through caves. In the past there have been problems with pipelines running underneath the ground such as massive sinkholes and pipe explosions, and by building the Bluegrass Pipeline in the territory they are subjecting the residents that live on that very sensitive part of the land to possible danger and a great destruction of the land.

The construction of the pipeline has been halted due to a lack of customer commitment. Along the Gulf Coast there are many regions from which customers could purchase natural gas, so it would be might be more expensive to transport the NGLs from the north to the south than to just pull from closer sights like the Eagle Ford and Barnett shale regions in Texas.

Texas has played a major role in the natural gas industry for many years. Currently, Texas is the highest ranked natural gas consuming state and 58,600 miles of natural gas pipelines within the state, according to the U.S. Energy Information Administration.

With such deep roots in the fracking industry, it is understandable that many in Texas wants to keep it here – it brings jobs and money into the state. However, our water supplies are taking a large hit from this industry. They become contaminated by the chemicals used in hydraulic fracturing procedures such as lead, uranium, mercury, ethylene glycol, radium, methanol, hydrochloric acid and formaldehyde and we drink from that contaminated water supply.

Fracking is the process by which dangerous chemicals are mixed with large quantities of water and sand are injected into wells at extremely high pressure which causes a major water contamination problem. In Texas alone there have been more than 2,000 reported cases of groundwater and private well contamination and more than 1,200 reports among other states within the last five years. They range from allegations of short-term diminished water flow to pollution from stray gas and other substances. With the current drought problem plaguing many areas of Texas, the issue of water contamination has become more prominent and our water resources more precious.

Many national and local organizations have openly opposed expanded fracking until safeguards are in place to ensure minimal pollution. Until these measures are taken our water supplies, climate and health will suffer.

Studies released over the past few months have linked pollution from natural gas extraction with birth defects.

In a study released in January by Environmental Health Perspectives, researchers examined data from 124,842 births between 1996 and 2009 in rural Colorado. They examined correlations between how close and dense natural gas development was to the pregnant mother and incidences of various birth defects, including congenital heart defects, neural tube defects, oral cleft, preterm birth and low term birth weight.

The study found that the most exposed mothers, who lived in areas containing over 125 natural gas wells per mile, were 30% more likely to have a child born with a congenital heart defect than a mother who does not live near any wells. One might ask – how is this possible?

Many pollutants from the natural gas extraction processes, including toluene, xylenes and benzene, are suspected to cause physiological abnormalities and mutations in human DNA. These pollutants are known to be able to cross the placenta blood barrier, raising the possibility of fetal exposure to these and other air pollutants.

Of course, air pollutants are not the only danger posed by natural gas extraction. The fluid used in this process is already known to contain over a hundred known or suspected endocrine disruptors – chemicals that can interfere with the body’s responses to estrogen and testosterone – which can lead to many health problems including infertility and cancer. What researches found in a late 2013 study was that groundwater samples taken from areas around natural gas extraction contained very high levels of these endocrine disruptors, while groundwater taken from an area without natural gas had much lower levels. In other words, natural gas extraction is linked with the contamination of groundwater with chemicals that cause infertility.

While researchers cannot say that their studies definitively prove that the natural gas extraction process causes birth defects or groundwater contamination, it is clear that more research needs to be done and the process needs to be further regulated before America continues on an ‘All of the Above’ energy policy. These studies suggest that the future health of generations to come depends on it.