Dancing in the Streets of the Nation’s Capital

Today we are celebrating a hard-won victory.  The U.S. House of Representatives finally voted to restore voting rights to the citizens of Washington, D.C.!  The D.C. Voting Rights Act, which provides voting representation in the House for D.C., passed 241-177 this afternoon.

House passage of this bill not only is historic, it also is one of the more interesting tales of strange bedfellows and political brokering.  One of the long-standing issues preventing a statutory fix for D.C.’s lack of representation were objections raised by some in the Republican party over what would be a guaranteed seat for the Democrats.  This bill eliminated partisan bickering by providing a new seat for each party.

The D.C. Voting Rights Act grows the House to 437 seats – one for D.C. and another for Utah.  Utah (a majority Republican state) has longed for another seat since the last census deprived them of a fourth anticipated representative (I am told the U.S. Census Bureau refused to count the missionaries on travel).  This clever DC-Utah match was first made by Rep. Tom Davis (D-Va.) who introduced the bill and worked magic on it in the less-than-receptive last Congress.

Eventually Del. Eleanor Holmes Norton came along and joined Davis on the bill, after her party’s concerns that the lone Democrat in Utah might be ousted were quelled.  The Democrats wanted Rep. Matheson safe – otherwise it would be a 2 for 1, right?  So, two proposals were floated and the agreed upon solution was to have the Utah legislature pass a four-district map that worked for both parties.  The 109th Congress was drawing to a close and Utah legislators had but a few weeks to get a contingent redistricting map passed.  Remarkably, they succeeded.  Unfortunately, the House did not, though the bill actually made it through committee and got within spitting distance of the House floor last December before the end of the 109th Congress.

The bill faced less resistance this year, but still hit some bumps in the road.  A few weeks ago a few members of the House tried to tack on a repeal of the D.C. gun ban.  House leaders pulled the bill to regroup and prevent other killer amendments.  The bill got a new number and headed back to the floor today for the victorious vote.

Rep. Davis, Del. Norton, D.C. Mayor Fenty and others should be thanked for their tremendous leadership on D.C. voting rights.  But it should be noted that the political will behind the bill was largely generated by the powerhouse coalition of diverse civil rights, voting rights, business groups and other public interest organizations (like Public Citizen).  The march towards passage led by a small group of committed folks who work for D.C. Vote has been dogged and masterful.

And we aren’t done marching yet.

It has been more than 200 years since the citizens of D.C. had a voice in Congress.   Let’s take this bill to the Senate and make it right.

No Taxation Without Representation 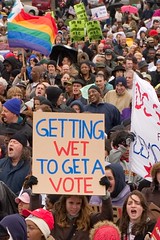 On a cold, rainy and windy day, I generally spend as little time outside as possible. But yesterday, in spite of the damp and dreary conditions, I joined nearly 5,000 people to march to the Capitol and demand the same basic right guaranteed to all other Americans — the right to be represented in Congress.

When I moved to D.C. almost two years ago, one of my biggest concerns was that I would have to give up my right to representation. What was the point of being able to walk to Capitol Hill if you didn’t have a member of Congress to visit?

So when I learned that Public Citizen was co-sponsoring a D.C. Voting Rights Rally, I gladly braved the wind and joined thousands of others in chanting "Free D.C.!" It was quite a sight–a sea of people marching towards the Capitol to demand the right to vote.

"No taxation without representation!" we chanted. This basic principle is found in the Declaration of Independence and the U.S. Constitution.  D.C. citizens made it clear that they will not rest until that promise is finally kept.

Congress has the opportunity to fulfill the promise now. The D.C. Voting Rights Act, H.R. 1433, introduced by Delegate Norton and co-sponsored by 18 voting members, will give D.C. a voting representative in the House, and a fourth representative to Utah, due to the state’s growing population, and to eliminate the issue of partisan politics (the D.C. rep. will likely be a Democrat, while the Utah rep. is expected to be a Republican). The bipartisan bill has been held up by procedural technicalities, and that needs to end. There is no good reason to continue depriving D.C. citizens of a vote in Congress. I was proud to be part of such a large movement, and I hope Congress got the message: we will not stop until we have voting rights.